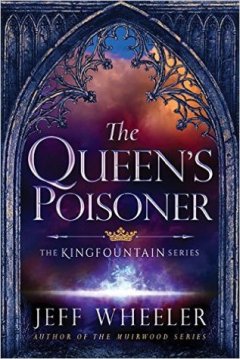 Cover for The Thief’s Daughter

Cover for The King’s Traitor

The Queen’s Poisoner synopsis from Goodreads:

King Severn Argentine’s fearsome reputation precedes him: usurper of the throne, killer of rightful heirs, ruthless punisher of traitors. Attempting to depose him, the Duke of Kiskaddon gambles…and loses. Now the duke must atone by handing over his young son, Owen, as the king’s hostage. And should his loyalty falter again, the boy will pay with his life.

Seeking allies and eluding Severn’s spies, Owen learns to survive in the court of Kingfountain. But when new evidence of his father’s betrayal threatens to seal his fate, Owen must win the vengeful king’s favor by proving his worth—through extraordinary means. And only one person can aid his desperate cause: a mysterious woman, dwelling in secrecy, who truly wields power over life, death, and destiny.

I’ve never been a huge fan of audiobooks, but for awhile I was doing hours and hours of driving. So much driving. When I noticed that there are some Kindle Unlimited books that are accompanied by “audio narration” I decided to go for it. I had The Queen’s Poisoner in my Kindle for awhile and the narration was available, so I went ahead and chose that. I really liked the ability to listen to the audio and then read the ebook when I got wherever I was going. Anyway, on to the trilogy!

So, this Owen kid is 8 and gets sent to live with the King because his dad’s a traitor and the King threw Owen’s brother over a waterfall. All three books are more strategy, intrigue, and quiet shenanigans rather than high adventure which is a lot more entertaining than you’d think. Jeff Wheeler is really good at writing a scared little kid’s perspective. I’ll admit that by the third book I was a bit over Owen, but I really enjoyed most of the other characters – even the bad guys were interesting. The politics were actually fairly true-to-life (as far as I know, I’m not really big in the politics scene) and were much more interesting when listened than reading on a page. I guess the narrator makes all the difference?

Listening to these books while driving or laying in the hotel room or on the couch in an empty apartment helped me get a little lost in this fantasy world of magic from fountains, little boys and their fill-in dominoes, first loves and true loves, spies and secret passages, and creepy men with limps. It was escape reading of the highest order and I very much enjoyed it. I had taken a(n unintentional) break from fantasy for quite a bit, but reading these has made me a bit excited to get back into it.

These three books make up the first trilogy that is followed by another trilogy following related, but different, characters. There are also a few books that are tangentially related that the author suggests reading between the two. Maybe another trilogy? I’m not sure – I’m suddenly buried under eARCs to read, so I’ll be reading those over the next while, but than will probably get back to these.